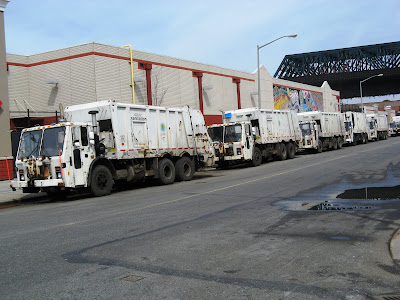 Some sanitation workers were playing touch football in a stark playground right in the middle of industrial Second Avenue. One of the guys had the wind knocked out of him and retreated to a bench. His colleagues gathered around to console him.

A block away, a forklift driver was sipping a coke, leaning back in the driver’s seat, almost sprawled over the whole back end of the vehicle, like it was a La-z-Boy. (That’s what you call attitude.)

It’s break time at Dunkin' Donuts, the working man’s friend. In the time it takes to finish a cup of coffee, I see representatives of a dozen different trades come in for sustenance. In that brief respite, I discover a secret: sugar and caffeine are what really fuels the industrial economy.