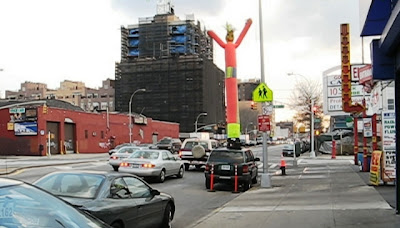 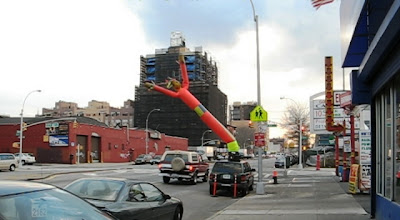 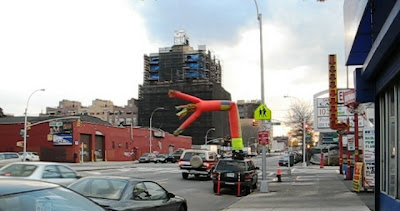 A glut of carwashes along Fourth Avenue led some of the more Barnumesque entrepreneurs to pull out the stops—like the dancing inflatable thin man (known in the trade as an “airblown”). The dancing airblown signifies nothing except “look here.” What they really need is a character, like “Charlie Clean” or “Johnny Shine,” with the requisite “back story”: he came to Brooklyn from Detroit, to ensure that one and all who passed through his domain would have the cleanest car in the neighborhood. “A clean car makes for a clean conscience”—that could be a sign inside, the first thing you see when you walk into the waiting room. It’s a moral imperative: Filth implies impurity/sin . . . Airblown come-ons dot the skyline—once they were the skyline, the tallest structures for miles, but now that the high rises are going up . . .
Posted by Adam E. at 12:01 AM